PWN Paris at the Global Summit for Women 2019 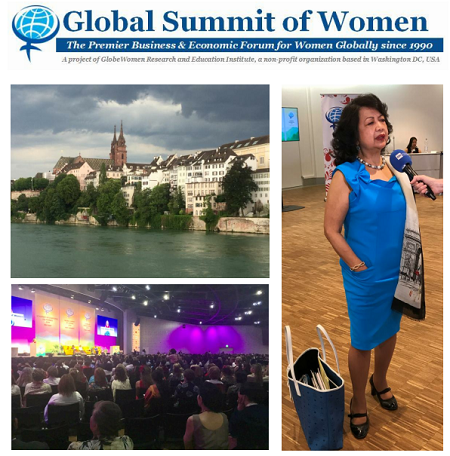 Beginning of July, took place in Basel, Switzerland, the 29th edition of the Global Summit for Women. This summit, founded and magnificently organized by Irene Natividad, gathered 1065 men and women coming from 70 countries.

The first and largest delegation was Vietnam, followed by China and France.

To celebrate this index, every member of the French delegation wore proudly at the opening ceremony and during Mrs Penicau’s presentation a T-shirt listing the 5 criteria of the index. Mrs Penicaud made a remarquable speech presenting the recently enforced “Gender Equality Index”.  She has been unanimously applauded for the big step forward in the quest of equality in the workplace:

It was a fun and concrete way to advertise the index and it generated a lot of interest and positive discussions.

The French delegation had a also a special guest with 9-year old Gala Vilarrasa, President of Le Trefle Rouge, who moved everyone with her pleed for help to childhood and poorest.

The summit has been the occasion of inspiring discussions, panels and workshops with leaders from the economic, social and political world.

Topics were extremely diverse: from conversations on inclusion and diversity, workshops on the art of persuasion, negotiation skills,  unconscious bias or the importance of factoring in maketing and social media the female touch to discussions on health and wellness, blockchain and personal data.…

A fantastic energy, quality interactions all in a camaraderie ambiance characterized the event. It was also a great opportunity to network and make friends across the world.

During the summit, 2 extraordinary people were honored by Summit President Irene Natividad:

In conclusion, a big thank you to Irene Natividad, President of the summit, and her team for a millimetric organization of such a great event: a wonderful combination of inspiration, energy, networking with emotion, fun and friendship.