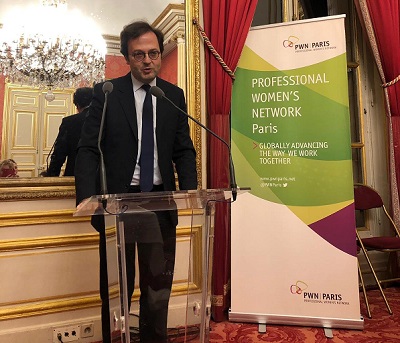 On November 12th PWN Paris hosted Speaker Dinner at the Senate with Régis Chemouny, KPMG Partner in charge of French real estate and hotels sector and the creator of Gend’her Think Tank. It was the first event in PWN Paris Gender Balance program where men and women will meet and act together to accelerate the dynamic for a more balanced workplace.

A dedicated ambassador of gender equality, Régis Chemouny created Gend’her Think Tank with the aim of bringing together senior men and women from the real estate and hotel sector to work side by side to change the mindset and promote gender balance in their industry.

During his talk Régis shared with us the main findings from the think tank’s recent study, as well as his personal insights and motivations for getting actively involved in this area.

He emphasized the fact that gender equality is not only a societal, but also an important economic issue – and this applies to all industries, as demonstrated by research. Companies must review their leadership to maximize their performance and ensure sustainable growth.

To quote Esther Duflo, the 2019 Nobel Prize Winner in Economics, and an avid advocate of gender equality: “Economics is not just wearing ties and suits and thinking about the macro economy and finance. It can be about changing the world, making the world a better place.“

While things are improving and the future looks promising with young generations’ different expectations and the new, collaborative and flexible ways of working that will favor gender balance - there is still a lot to be done. The gender gap is not just a problem of traditional industries such as real estate – one of the examples that Régis shared was from the start-up world where only 12% of startups that successfully raise funds are managed by women.

France is among the top countries when it comes to proportions of female leaders. But the status quo is more of a cultural issue, so there is work to be done in changing the mindsets. And changing the mindsets will be easier if not only women, but also men are actively involved in advocating gender balance – in fact the importance of men and women acting together was emphasized several times during the evening. This is the reason why Régis Chemouny said he appreciates PWN Paris opening to men and its efforts to actively involve men in promoting gender balanced leadership.

If you want to read about Régis Chemouny’s insights and motivations in his own words, see his PWN Paris Manbassador profile here.

To find out more about Gend’her and the findings of its study, as well as access the full barometer document (in French), click here.

Thanks to Régis Chemouny for his time, generosity, and the very insightful presentation.

Thanks to Corinne Albert, VP Events, and PWN Paris Events Team for organizing this event, and to PWN Paris Presidents for their presence and support.