Three Secrets to Your Career Success 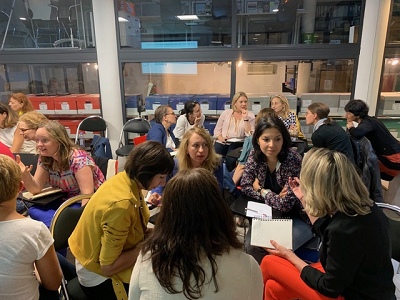 To kick off our 2019-2020 program, we were delighted to welcome Corinne Hirsch as guest of honour. Corinne, Vice President of PWN Paris Think Tanks for many years and co-founder of the Laboratoire de l’Egalité, was recently named ‘Chevalière de la Légion d’Honneur’ in recognition of her work for gender equality in the workplace.

The objective of the workshop was to explore the keys to career success that are never taught at school let alone at work. Successful career strategies aren’t always spelled out or explained, especially to women.

The evening began with a collective investigation of the potential leverages of a successful career.

Many words were offered by participant: strategy, self-confidence, ambition, good work-life balance, determination, etc. It took quite a while for the three key words to be put forward… which confirms that we are not really aware of their importance, whether working for a company or as an entrepreneur.

Corinne then presented and explained those three secrets that will boost your career and help you maximize your potential: mentoring, networking and visibility.

They are interlinked and fuel each other.

Participants then worked in small groups to explore the way of individually developing these three “informal” career leverages.

As a conclusion, Corinne explained that the year-long programs of PWN Paris is specifically designed to boost our members’ ability to master these leverages.

The International Hub, launched on October 2nd last, will be offering similar networking, visibility and informal mentoring opportunities in English.
The PWN Paris Top Executives program offers its participants the very same plethora of opportunities all year round.

Remember: actively contributing to one of PWN Paris’ teams as a volunteer is a fabulous way of growing and developing your visibility, your network and to find informal mentoring opportunities.

The PWN Professional Development workshops for 2019/2020 are kindly hosted by our partner the INC - Institut du Neurocognitivisme.
Thank you to Pierre Moorkens and his team for their support and to PWN member Muriel Janoir Bessioud for making it happen.