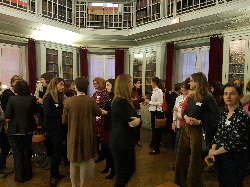 The last Welcome Cocktail of this season took place on 27th of June in the beautiful premises of Hotel de l’Industrie in Saint-Germain des Prés, and it was a success. Despite the heatwave that hit Paris that day, PWN Paris hosted more than 30 participants, active women with a keen interest in personal development and networking.

Françoise Derolez, co-President of PWN Paris, and Suzana Iorga of the Membership Team, introduced the network and its key programmes  of activities. Françoise Derolez highlighted the success of the PWN Congress 2019 organised two weeks earlier, calling it a very special time, and drew attention on the Speaker dinners organised at the Senate – inspiring events where high level speakers are invited to share their professional and personal experience of career development.

Marie-Laure Barrau, Vice President of PWN Paris Entrepreneurship Club, made a presentation of the club along with its objectives, and was proud to announce the winners of PER – Prix Enterpreneure Responsable by PWN, that were awarded at the PWN Congress. The PER 2019 Award went to Shu Zhang of Pandobac.

Suzana Iorga highlighted a few PWN Paris programmes such as Mentoring, which has been engaging men since February 2019, and “Unleash your talents!” series of the Professional Development programme, which had its team grown from 3 to 10 volunteers, and will be available both in English and in French from Autumn 2019.

Claire Perrin, General Secretary of PWN Paris was happy to share her personal experience as a member of PWN Paris.

Claire Perrin presented the new structure of the board to be implemented from September onwards and announced the future elections for Board positions scheduled for October 2019, emphasising opportunities for members of PWN Paris.

The next PWN Paris Welcome Cocktail will take place on September 26, 2019.